I spent most of my free time last Fall and this Spring cherishing my family and helping my parents clean up the landscaping and touch-up paint their new house before they rented it and moved to Indonesia. They've been overseas for over 6 months now and will be home for Christmas in 23 days!! But who's counting?

After they left I buckled down into work, church, etc. About 3 months ago God blessed me and my roommate with the opportunity to host a weekly coed Bible Study in our apartment and it's been AMAZING! Last month, I opened up to a woman I've known for 12 years and asked if she'd consider discipling me - turns out she'd recently begun praying about that very thing!! I'm extremely blessed to have her in my life. :)

Ok, now that I've caught you up on the important details I want to talk about my choice of title. I'd like to explain it. (I realize that I write for myself - to help me remember the details and share my stories, but I invite you to read them.)

Sept. 30 - I'm attacked by a cockroach in my car. I'm also told by my little sister about her car accident that happened in her parking lot about the same time. After coaching her and listening to my parent's responses we end on a good note. I post the following for my friends:


Step 1: Be driving on a major road - preferably one with a speed limit of 65mph.
Step 2: Notice movement INSIDE your car from the corner of your eye...
Step 3: Watch in horror as a COCKROACH runs across your radio dials, onto your dashboard and then launches itself straight at you!!
Step 4: Scream, wave your hands like a little girl and start to slam on the brakes.
Step 5: Have the presence of mind to lift your foot off the brakes before you slow too much.
Step 6: Do not find cockroach, so clutch the neck of your dress closed with one hand and hold the steering wheel in a death grip...only 11 miles til you're home.
Step 7: 6 miles down, 5 to go...arms are screaming from how tense you are, decide to rest your arm, but feel the cockroach as you do.
Step 8: Repeat steps 4-6, but you're 6 miles closer to home!
Step 9: Arrive home. Exit car and check cautiously for the roach.
Step 10: Roach is nowhere to be found. Decide never to ride in your car again.

I hope that thing is dead on the floorboard of my car in the morning...I can't believe I just now thought about coating my car in Raid...

Oct. 1 - A little leery of the cockroach reappearing, I'm pretty tense most of the way to work. My friends' comments about burning my car were unnecessary as I did something a little less drastic but equally permanent.

20 miles into my drive I'm marveling at the light traffic and catch my breath as I peer at the gorgeous sunrise! Then gasp as I glance back at the road to see red lights. (A wreck had just happened about 10-15 cars in front of me.) I'm unable to come to a complete stop without hitting the truck in front of me, there is a decided crunch/bang. We both move onto the side of the road (I'm shaking) and realize there is NO damage whatsoever to the truck. The men in the truck (all being in a hurry and possibly uninsured) decide to leave me.

I spend almost an hour waiting for the tow truck driver. Tow truck driver turns out to be a grouch* and cusses at me when I tell him that the place he's trying to take me is incorrect and I need to call my insurance. Insurance lady somehow remains calm as I hold back tears and explain that I'm less than 3 miles away from the auto shop I want to get to but the place the driver wants to take me is 30 miles away. Driver lights up a cigarette and scolds and cusses at me some more while we wait for his company to give him the go ahead to take me where I need to go. Eventually all is worked out and he takes me to the dealer about 2.5 miles away. He says some forgettable things and I spend another 20 minutes on hold with my insurance.

My boss shows up, gives me a hug, and takes me to pick up my parents' car. It is decided that my car is totaled and thus begins the journey of car-hunting.

Oct. 3 - I don't even recognize my car without the bumper and headlights. I pull everything out of it and sadly pat it goodbye. I had just bought $500 tires. :/

Oct. 12 - My sisters and I spend the weekend at our precious cousin's wedding in Tyler, TX and are en route to Houston on the 75 mph highway. It's been a little misty and there's been scattered showers, but all in all we are on track to make it in time for lunch with our friends. Suddenly the road becomes a terrifying obstacle course.

My sisters had been sitting in the backseat watching a movie and I could barely hear it so it'd been a quiet drive for me save for the parts where I enjoyed listening to my sisters laugh about the movie. I was thankfully undistracted and therefore noticed the instant the cars in front of us started swerving and crashes began to sound. It seems an impatient car had swerved into the left lane clipping the car there and sending it spinning until it stopped with the front of the car in the left lane and the rear on the shoulder.

Somehow I managed to stop the car without hitting anyone in front of or beside me, but I couldn't get off the road because the suv behind me had pushed a car into the guardrail and they wanted to get away. They had pulled up beside me but could not go any further because there was a car stopped in front of me. It didn't take long. My sisters were screaming and stopped just as I came to a complete stop. We couldn't believe that we didn't have a scratch on us. There was a moment of hope and then I looked in the rearview mirror. I watched about 3 cars hurtle past us just missing us and then I saw the black suv and semitruck. "We're going to get hit." I calmly told my sisters and Becca leaned forward. (She was the one closest to where they would impact and I'm not sure why she leaned forward, but it protected her.)

The impact was swift and loud. I don't even remember hitting the dashboard, but I had bruises from it. After that impact the highway basically shut down. I had my sisters stay in the car for a bit longer until we were certain that no other cars were coming. The doors on the right side of car wouldn't open anyway. The impact had damaged the computer system and sent pieces of our taillight flying to land on top of the car and hood.

I winced as I knew I'd need to call the insurance company again and I'd JUST talked to them 10 days ago about my own car. I had a light bit of hope that maybe the car would be driveable so we could get home, but that died after I looked at it. The EMS and police said that if the impact had been one foot further it would have killed Becca.

My sisters talked to the other drivers. The one who had prevented me from getting over and had pushed the car behind me into the guardrail had taken off. There were 9 cars actually involved and 4 of them fled the scene (along with about a dozen lucky vehicles who'd managed to get out of the way). The one who was originally clipped, my car, and the suv that hit me from behind were totaled. The semi had no damage. The car behind me that had been shoved into the guardrail also stayed, but she only had cosmetic damage to her car. She was a sweetheart to vouch for us. 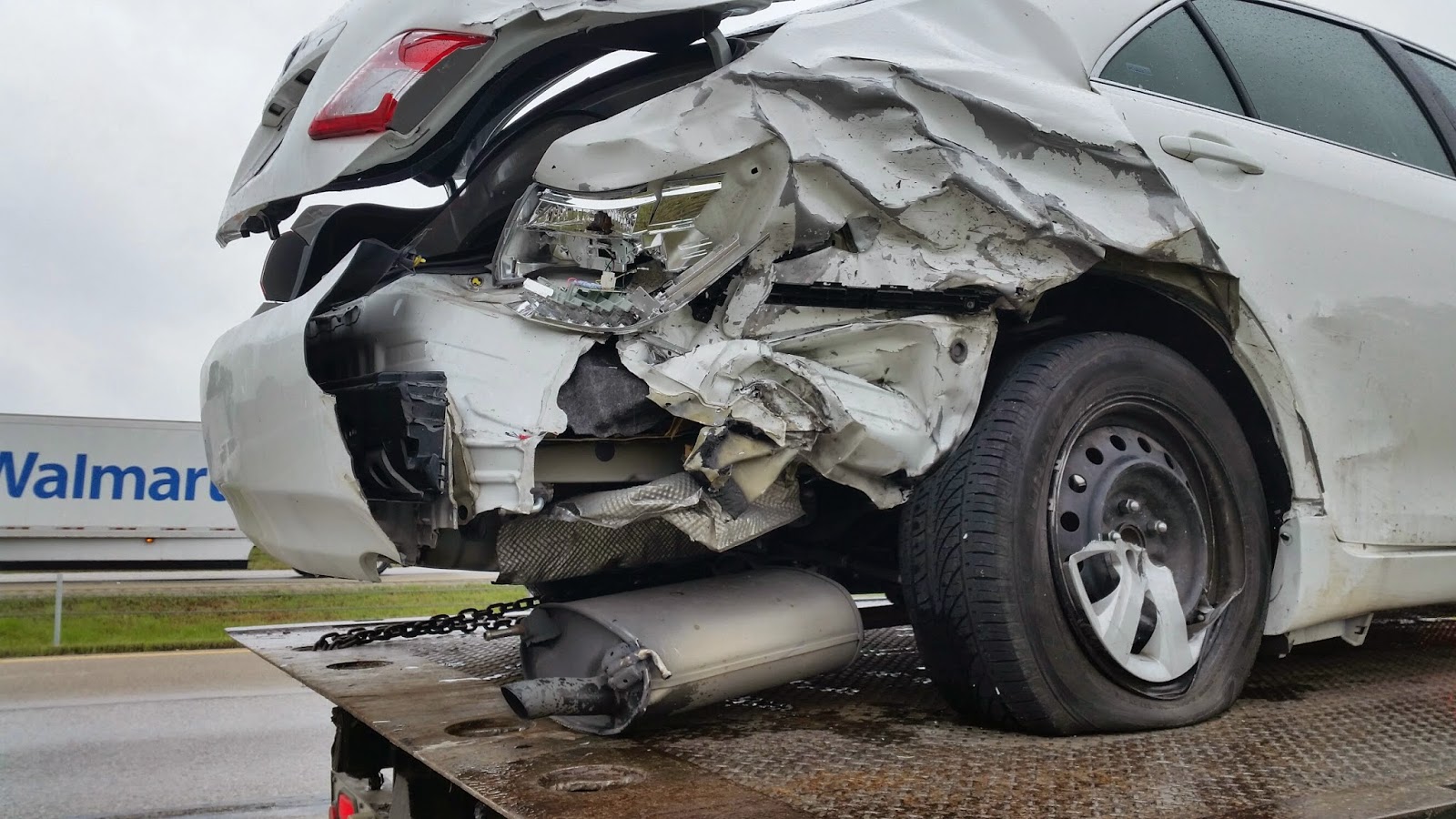 As we stood there with our overnight bags and huddled under the umbrellas, it was all I could do not to collapse in tears. And I did cry. But I had sweet hugs from my little sisters and I was SO GRATEFUL that they were ok! We were given a ride to Buccee's by our tow truck driver who only drives a tow truck part-time. He works full-time as a mortician! We told him that we were grateful that we were meeting him as a tow truck driver as opposed to the other option...

My roommate drove over 1.5 hours to reach us and she promptly helped us load everything from my parents' car into hers. She'd even provided water bottles and snacks and made a pit-stop at a burger place to get us some food because by now it was nearing 2pm. Apparently the day was a bad one for Houston roads as we had to take two different back roads to get home.

Oct. 13 - I give my testimony to the insurance about what happened.

Oct. 14 - The insurance asks for my testimony again and then afterwards tells me that they believe me, but the suv and semitruck driver both have different stories. I fight back anger.

Oct. 21 - It is discovered that I will need a new catalytic convertor in the next 11 months. (Those are not cheap.)


* I have known some WONDERFUL tow truck drivers. I was actually pretty happy to see the guy at first. But he seriously got up on the wrong side of the bed or something that morning...
Posted by Hannah B. at 12:13 AM

I love beauty. I love that the Lord also delights in it since His creation is stunning! I currently work full time as the Hospitality Coordinator for Grace School of Theology!

I write about memories and moments, family and friends, treasures and tragedies. My thoughts are scattered and their only unifying factor is that they belong to me.

I belong to the Lord. I strive to do His Will and I confess, understanding what that is is not always easy. He saved me from self-destruction and preserved me for His purpose. His faithfulness is great and His love is everlasting!